G4G posts, and the ongoing “blog war,” will have to be on hold for some of this week while I’m in Cuba on a family holiday.

While I’m there, I’m going to play one of only two golf courses in Cuba — this one designed by Les Furber in Varadero (http://www.varaderogolfclub.com/en/home.htm) 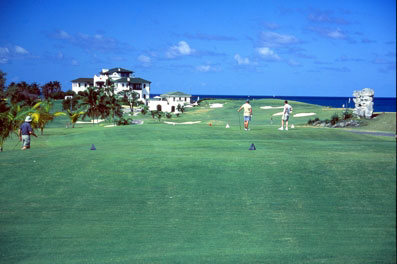 While I’m not entirely partial to the Furber courses I’ve played (I think Silver Tip is awful while Predator Ridge is good in spots, but not memorable), I’m intrigued at the Varadero course, largely because it was built by Les for the Cuban government. Apparently the construction was not without its problems. Cut off from supplies by the Americans, and without help from the Russians after the collapse of communism, Furber found that in Cuba once diesel fuel ran out, it was hard to get more. That meant construction equipment would run out of gas and just sit in one spot for weeks. Russian-made dozers would break down, and parts would be impossible to find. Engineers made the equivalent of $350 per year. And in the end, when it was all said and done, Furber didn’t get his full pay cheque from the Cuban government. Let’s get this straight — aging dictator Fidel Castro apparently has millions tucked away and he couldn’t afford to pay a nice guy like Les for his services?

“I’d work in Cuba again, but not for the government,” Furber told me recently.

But even with all the issues he had with construction, Furber said the course, directly seaside, is interesting and a lot of hand work was used to create many of the course’s features. Apparently conditioning was an issue at the start, as there was little history of golf in Cuba and what had been there had largely disappeared after the revolution. According to Furber, that situation has largely been corrected.

I’m intrigued and will report back….

SQAIRZ and PinPal – a winning combo