The much discussed 7th 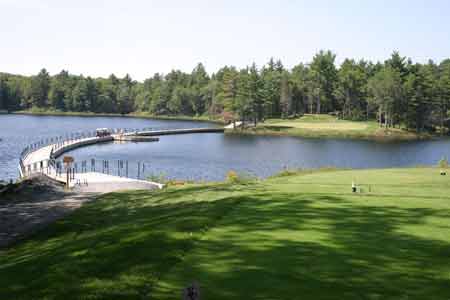 It might be a tough sale. Sequin Valley put me out, pretty much right from the start. I asked the starter whether it was possible to walk the course. He laughed. “It is about 11 km of cart paths out there,” he replied. “I wouldn’t walk it if I were you.”

It didn’t seem like the walk would have been too bad out of the gate. The first hole, a par five with a marshy area in play off the left side of the fairway, was a fair opener to a natural green. But the first hole isn’t particularly indicative of what you can expect at Seguin. However, the second paints a pretty fair picture of the remainder of the course. Facing a tee shot to a blind landing area, players then hit their approaches to an elevated green with marginal bunkering. In truth, this is pretty representative of many of the holes on Sequin. You tee off slightly downhill, only to hit an approach to an uphill green with plain or no bunkering.
That’s not to say all of Sequin is a wash out. The fifth, a par five playing through a valley, is quite challenging and visually enticing, Sequin’s target golf

while the following hole, a downhill par four with a natural looking greensite, would not be out of place on something created by Tom Fazio. The club places a lot of emphasis on its 7th hole, a 217-yard par three over water to a tight green surrounding by trees. It is a typical all-or-nothing hole, that forces players to hit a long iron to a green that is only partially receptive to such a shot. Is it a great hole? Not really — it works more visually than it does as a playable hole. It also must be incredibly punishing for most players who will have a tough time carrying the ball over 185-yards of water.

In order to create the drama of the 7th, the designer at Seguin went well out of his way to route the hole into the overall course. It shouldn’t come as a surprise then that the remainder of the course feels disjointed, with more up-and-down holes linked together by increasingly longer cart rides. The ride between the 7th and the 8th is remarkably long, a precursor to a majority of the back nine. 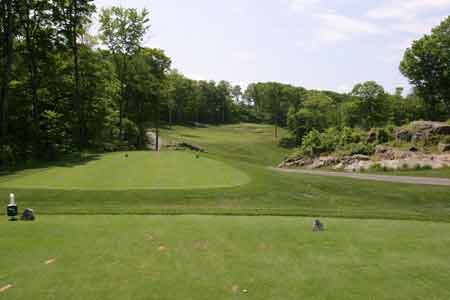 One clear indication of the strange routing of Seguin Valley is the disparity of yardage between the nines. The front plays nearly 3,800 yards from the tips, while the back plays barely 3,000. Take a look at the course map and you’ll see how the holes were forced in around wetlands and other hazards. While it may have appeared that Sequin was built on land ideal for golf, the result suggests the property was almost unworkable, or that the designer was single minded, always scoping out downhill tee shots, regardless of the cart rides needed to make the holes work.

It is strange these days to find a course that does not list its designer on its website, but given the talk of a lawsuit, it makes some sense. When I played Seguin last summer and asked who designed the course, no one seemed to know, or be willing to say. David Moote doesn’t have a working website, so it is hard to say whether he considers it his design. Either way, this course would benefit from someone who was able to add some distinctive bunkering to improve the visual appeal. In fact, several holes don’t have any bunkers. That isn’t a bad thing necessarily (most architects overbunker their courses), but at Sequin it looks more like someone ran out of money and simply didn’t put bunkers on some of the holes.

Regardless of its shortcomings, some hold up Seguin as a “hidden jewel” of Muskoka (though I don’t think of hidden jewels as charging $100 green fees), placing it in the same league as Rocky Crest and Bigwin Island. I just can’t figure out how anyone can place this course in that company. Even with an overhaul and the creation of appropriate bunkers, Seguin Valley is outclassed. And with the launch of the spectacular Muskoka Bay this summer, I doubt many will be talking about Seguin going ahead.

Ontgolf.ca readers seem to agree with my take on Seguin:

SQAIRZ and PinPal – a winning combo